Article from the Triangle Business Journal 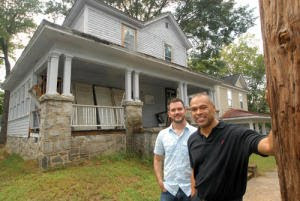 This article by Amanda Jones Hoyle, Durham downtown’s Historic Revival, appeared in today's Triangle Business Journal.
DURHAM – The Victorian-style house with a wide wrap-around porch in Durham’s historic Cleveland-Holloway neighborhood has certainly seen better years.
On multiple occasions, the two-story building at 501 Oakwood St. has faced the threat of demolition.
Many of the windows have been boarded up, and the foundation had started to sag. It has been decades since it felt the brush of a fresh coat of paint.
But the Clapp-Ferguson House
at the corner of Ottawa Avenue is getting a new lease on life, thanks partly to a group of preservationists that has secured valuable historical tax credits for its buyers. The group also helps that the home is in a neighborhood that’s become popular among artists, musicians, young families.
The home and the neighborhood are evidence of urban redevelopment that has slowly graced the fringes of Durham’s downtown district over the past couple of decades.
In the 1980s, it was the historic Trinity Park neighborhood that became the neighborhood of choice for many of Duke University's administrators, faculty and students. That was followed by an eastward movement into the Old North Durham, Watts Hospital-Hillandale and Trinity Heights neighborhoods.
In recent years, families have been targeting homes in the Walltown, Cleveland-Holloway and east Durham neighborhoods, says unofficial Durham historian Gary Kueber, who has been tracking the causes and effects through his Endangered Durham blog. Kueber also is chief operating officer for one of Durham’s most active commercial redevelopment companies, Scientific Properties.
“House prices fall to a very low per-square-footage cost. They become undesirable areas. Then a few people who love the architecture and want the experience of being close to downtown decide to take the plunge,” Kueber says. “They begin renovating these houses and transforming the neighborhood.”
Renovation specialists
Trinity Design/Build of Durham usually has 10 to 15 projects going on around Durham’s historic neighborhoods at any given time, says construction manager Alan Spruyt. “Older properties in older neighborhoods are more likely to appreciate,” Spruyt says. “These are beautiful old houses, and people are eager to live in one.”
But even the well-preserved older homes usually need a fair amount of upgrading and rehabilitation work. Trinity Design/Build is completing an overhaul of the 2,600-square-foot home at 1011 Monmouth Ave. in Trinity Park that was home to multiple generations of the same family before it was sold to Trinity Design/Build’s investors in 2009.
The renovators were able to keep the casements and plaster arches of a dining room window and add radiant floor heat for the rooms downstairs and the bathrooms upstairs.
But the project hit a few snags that aren’t uncommon in historic renovations. For one, contractors discovered a buried heating oil tank in the yard that had to be removed.
Courtney James, managing broker of the Urban Durham Realty real estate firm, says most buyers are looking for homes that have already been renovated. Only a brave few are willing to buy an older home that still needs rehabilitation.
A big selling point of these homes is walkability to shopping areas and to downtown. “People want to be close to amenities,” James says. “They may not be walking there every time, but they want to know they can if they want to.”
Kevin Davis and his wife already live in Trinity Park, about one mile north of downtown, but the couple recently purchased a 1920s-era home on Gloria Avenue to be even closer to downtown – just two blocks from Durham’s Brightleaf Square and two blocks from the new Bull City Connector bus line. “It’s the perfect place to live,” he says.
“On a national level, this is a niche trend with a lot of cities looking to get away from longer commutes. Raleigh has seen it with its Five Points and Oakwood neighborhoods. Durham is seeing this, too,” Davis says. “It used to be after 5:30 you could drive through downtown and see no one on the streets. Now, we have activity centers bringing people in,” referring to recent projects at the American Tobacco campus, construction of the Durham Performing Arts Center and other pockets of downtown development or redevelopment over the last few years.

The Cleveland-Holloway neighborhood caught the attention of partners Adrian Brown and Kevin Flynn last year when the neighborhood offered a tour. “It was hilarious in a way because you usually see these tours in established places like Trinity Park with really expensive homes,” Flynn says.

Cleveland-Holloway still has its pockets of vacant homes, homes in disrepair and crime, Flynn says, “but you could see this glimmer of hope.”

Flynn and Brown, who works for the Greater Durham Chamber of Commerce, had been considering a move closer into the city and were drawn to the Clapp-Ferguson House that Preservation Durham and Preservation North Carolina were struggling to save.

Durham real estate investor Ken Gasch had already started work to shore up the home’s foundation and to replace the floor joists, and now a sales contract with Flynn and Brown will fund the rest of the renovation. About another $100,000 worth of work is needed before they begin moving in furniture.

“We are definitely not pioneers,” Brown says, “Artists, musicians and students have been coming here for 10 years, braving it out. But it was just an attractive place to both of us.”

Email ThisBlogThis!Share to TwitterShare to FacebookShare to Pinterest
Labels: in the News, Renovation/Preservation