Meet the Neighbors: The Alstons

I was happy to sit down with one of our neighborhood's longer-term residents, Mrs. Christine Alston, who has lived in the neighborhood since the 1960s, and ask her about her life. Her daughter, Bernice, who grew up in the house on Queen, also sat with us.

Both preferred not to be photographed directly, so included here are shots without their faces. My questions are included only when needed to understand the responses; otherwise, I omitted my questions to avoid redundancy and keep the story flowing.

We kids would make swings -- put a rope around and tie it around a stick, then according to how much you’d weigh, you’d fall. Every time I’d put one up, I’d make my sister try it out, and she’d fall and hit her head. Mother would run out of the house and scream. Decent fun.

My people believed in the church, holding hands, children in front. They preach in the morning, and had a big turnout in the afternoon. Everyone would bring a basket with food, packed with food, and set it on the table – pies, cakes, meat, strawberry pie.

Mother called me a tom boy because I liked to climb the trees and jump the fence. I could jump a fence in a minute. She called me a tom-boy girl. My parents farmed, chopped the cotton, chopped the cucumbers, squashes. After the man got the machine to do all that, no more. They had the T-model cars back when I was a kid.

Mother used to tell us about it – how she come up as we was growing up. She told us about slavery time and we listened to her.

When company came, the company would eat first, then Mother would call us kids in to eat. My parents taught us to know to do the right thing, to know how to speak to people and treat people, and know how to go to church and serve the Lord. And to obey them. We couldn’t sass them. If we sass them, we’d come up to the house and run up under the bed. There were 11 children. All of them did not live. I’m next to the oldest, not the oldest girl. 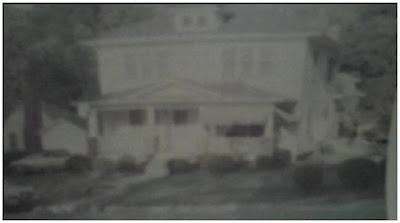 A picture of 402 Queen, circa a long time ago 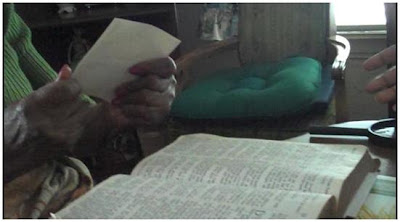 Mrs. Alston talks about the picture, stored in her Bible, above.

How / when did you find this neighborhood, this house?

Urban Renewal was buying all the houses and making people move out of them. They were supposed to build more houses and they didn’t do it. I got out and looked for a place. I was in Durham already. Made me move out of the house I was in, that’s what I’m getting at, so I came out and looked for [another place]. I wanted that house next to you (this house). Used to be a nice Principal from Central I told “If you move I want that house.” Well, now I like this one, because the owner was very nice. The rent man gave my baby [Bernice] a bedroom suite.

How did you meet your husband?

He’d be out behind the new Heath Department. There was houses and places of business all down there, until that bridge on Roxboro. Movies, drug stores, fruit stands, cafes. Taxi stands. It was black only at that time. I used to go up there in the drug store, that man fixed us the best soda you ever put in your mouth. They had good doctors, now they don’t have good doctors. Rent was cheaper, $9 a month, and $15 a month.

I used to live in East Durham. Stayed with my Mother and Dad a long time before because I couldn’t find what I was looking for. Johnny Cash said, “If you’re looking for someone the rest of your life…go here, go here…” I like Johnny Cash. "Fell into a hot ball of fire," I used to get mad at my husband and I’d play it on the record player. He’d put his head down, and smoke, and get that funny look on his face. He died in 1999. They don’t make them like that anymore.

I used to work in the factory, night and day. Up there in Liggett Myers. They have a line big as the table, I’d pick up paper and sticks out of the tobacco. Clean it. Now people are so careless, not wearing a hair net or being clean. Then, they got talking about tobacco poison, man jumped high, it closed.

On the weekend we’d go to church, then after church we’d go to lunch. I’d come home and cook sometimes. I’ve been a smart old soul. I used to take [Bernice] from here over on Fayetteville to Sunday school, walk and take her. Catch me a cab and go back there in order to be there when service start.

I used to go to Carolina Theater. But I used to like Center Theater the best, right there by the post office. 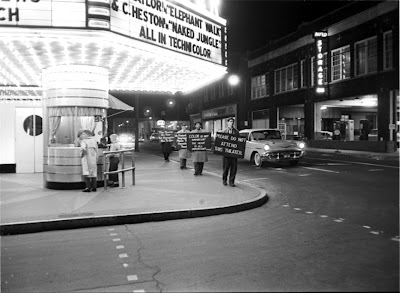 Picture of picketers protesting segregation at Center Theater courtesy Open Durham – follow the link to read an interesting post about the theater’s history and the above civil rights protests.

I liked Bing Crosby. A man used to be there playing the organ before the movie went on. I liked that too. Once I overstayed my time [at The Center] and Daddy was waiting for me, standing on the porch. I got a good talking to. Wasn’t supposed to be out that late. I used to live way out by the Robinson Tobacco Factory, by the underpass on Fayetteville. Walked all that way.

[Around here] when they built the library I thought it was nice. There used to be woods before that, and a service station.

What advice do you have for young people, or medium-aged people like me?

Someone told me you’d ask something like that because I’m older than you. I think the young people growing up now should obey their parents more. Learn how to pray because I think we have turned our faces from our Lord to the devil face. Little kids run out in the street and get run over. United States is the best and richest, thanks to the Lord. We turn our back against them. 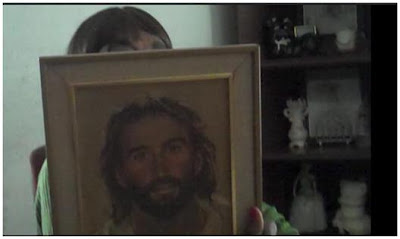 Mrs. Alston with a picture of Jesus she found

I remember, it was kind of rainy that day, I was looking for a job, and I happened to look on the ground, so if I see a bible I’d pick it up. But I saw Him, and I picked it up, and I knew it when I saw Him.

Maybe the man Jesus was black, not white.

No, he was white. God made us both the same. He painted me black, and you white, but we’ve all got the same creator.

Why did he give me this big nose? He must not have been paying attention while he was making me.

What’s essential for a happy life?

Marry a good man, he treats you nice, you agree with him he agrees with you, you go the right way, serve the Lord and treat people nice, don’t do too much yabba yabba talking. It’s no use.

If a person gets sick or something, come around and help him. My Grandma, they’d come see her, and bake fresh rolls. When time to go home they’d go home. Can’t be too greedy, because He’ll take it from you.

Keep a good heart and you know how to treat people and talk to people. We can’t be good to nobody now. We’ve turned our face away from Him. When we sing now, what kind of songs do we sing? We sing anything we want to. I am a witness, I’m a sinner. I’m a witness to him, what he’ll do for you.

What would you like to see happen in this neighborhood?

[Bernice responds: “A good neighborhood watch would be excellent. We need Police around, checking in at night.”]

When I go somewhere, I want it to be just like I left it. No shooting. I’d like to hear some praying. People used to come up and down the street praying.

[I asked about her experience of the Civil Rights movement, the sit-ins, and more]

What do you love about this neighborhood?

[Bernice says: “It has gotten more quiet. It’s not bad like it used to be…crime rate is better now, kind of peaceful. But people know each other”]

She’s about right. I don’t know. I’ve been here so long. I just fell in love with it. My husband loved it. Don’t have to catch the bus. More beneficial. I’ll say that.

When I say “Mrs. Alston” what do you hope people think?

You know, this world has got so wicked.

[Bernice says: “That you’re a nice lady, and a friendly lady…”]

I’m a nice lady, and I loves to pray to Jesus, and I'd help somebody if I could. I like to pray for people who haven't got the right mind. We’re not taking our time anymore.

When did you take up guitar? Will you play a song?

[Both laugh] No I won’t play a song [on camera]. I got to get me another one, this one over here has got no tone to it. I know Rob tuned it, but it's got no tone. [Strums] 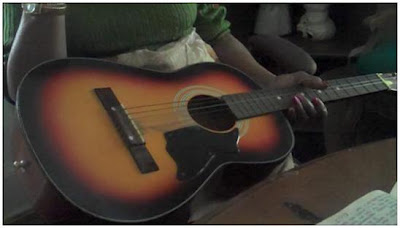 Wow, that was really cool! -Holly