"On June 21, 2010, the Planning Department received a citizen petition to expand the
Holloway Street Local Historic District. The request was to expand the local district to
align with the National Register Historic District boundary increase that was recently
established."
"Planning staff surveyed an area slightly larger than the National Register district to
determine the appropriate boundary for the local district."
-Holloway Local Historic District Expansion and Preservation Plan Update
http://durhamnc.gov/ich/cb/ccpd/Documents/DPC/Agendas/2013/July/X1000003_Z1200030.pdf-

And so began the possible changes to the Cleveland Holloway Local Historic District (LHD) boundaries.
The proposed map would be a large addition to the current boundaries which mostly only include a couple of blocks on Holloway street and Cleveland street (below in blue).  The Planning Commission put forth a map for approval with two separate options: one that includes the green area below and one that excludes the green area from the LHD (Alternatives A & B). 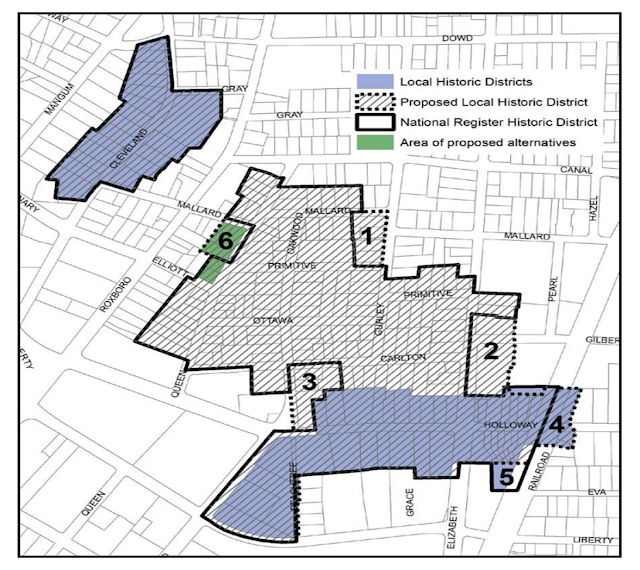 Easy as pie, right?  Wrong (and by the way, I've messed up my share of pies).
Changing land boundaries and zoning is usually never easy, and it probably shouldn't be.  There are a few land owners that have stepped forward and said they don't want to be inside dotted, striped line (properties shown in red).  A note that our beloved green-thumb neighbors, SEEDs, have also requested not to be added but are not highlighted in red.  Each of these owners have their own varied and valid reasons. 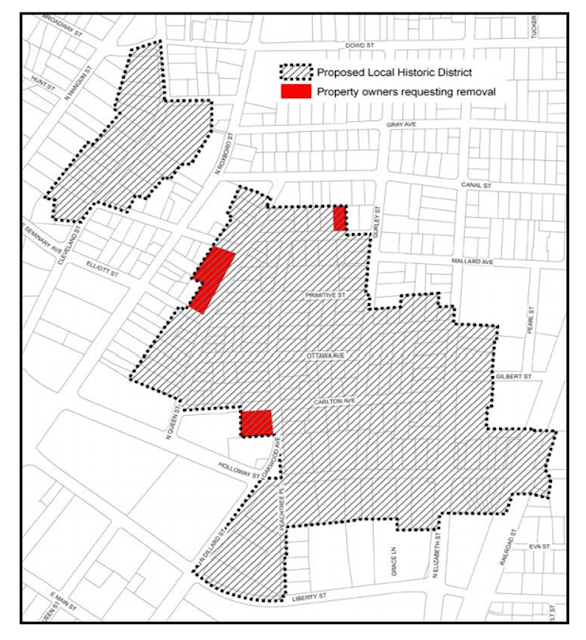 Many neighbors have prominently voiced concerns about including (or not including) the 600 block of Queen street, the western-most of the red areas.  Remember the Alternative A & B above, the green highlighted land?  Yes, there is the main area of contention.
There are, of course, reasons for this neighbor concern including that the land there has much more dense zoning and the entire square block is now vacant and ready to be developed.  Basically, something will be built-up there probably soon.  Planning by its current owners has already begun.  So, several in the neighborhood think it's appropriate for that land to be put in the LDH in order to ensure that what ever is developed there is appropriately scaled and maintains the history of the area.  The land had contained historically-contributing homes for over a century.  Other issues such as traffic, lack of neighborhood parking and sidewalks, housing diversity and affordability also weigh in.

A Planning Commission meeting occurred on July 9th where most would agree confusion surrounding the actual map was a major factor.  The vote ended in a tie on accepting the boundary increase with Alternative A.  The process now moves to the City Council where we wait to see what will happen next.

If you want more information on the issue please read the PDF linked above.

I am still unclear as to why ONE house over the railroad tracks gets included but not the other homes on the Holloway block!

And while these properties might be on the edge of the local district they are snack in the middle of the neighborhood.

I just dont understand the process. All the Calvin O'Bryant properties should have been included.

You can always petition to join in the expanded district :)

I agree that the most expansive version should be used. Everyone gives up a little and we all gain a lot in terms of stabilizing our community's built environment. It's of course up to us as individuals to keep the people aspect of the community healthy and strong.

I just watched this on DTV8 (yes, call me fun) and it seemed like the planning committee should have *first* voted for A or B, and *then* voted on each lot being removed. The motion failed because the other items in red were being bootstrapped to the 500 Block of Queen St. It seemed to me a few of the votes voted "no" because they *did* want homes that were clearly historic to stay in the district. So the developer should thank the homeowners that also wanted to be removed from the district for having this fail? This was very confusing, and I would have tabled the whole thing just to know what the point of order would be during the vote.