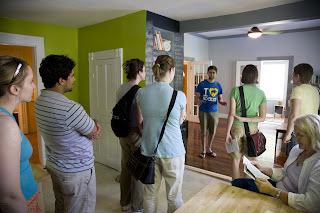 It also kinda baked, but at least it wasn't raining. Instead, the sun was shining last Saturday morning as neighbors finished last minute yard work, house cleaning, plant arranging, and Matt Dukek of 502 Mallard Ave. -- the tour's starting point -- hammered the "Cleveland-Holloway" sign into the ground at the intersection of Oakwood, Mallard, and Queen.

The Second Annual Cleveland-Holloway Neighborhood Tour of Homes began auspiciously with a preview article by Jim Wise in the N&O's Durham News, which focused on the Holloway St. Historic District expansion and restoration taxes, and gave our own Ken Gasch an opportunity to use the word "pantyhose" in the printed media.

The crowds began arriving on

promptly at 12:59pm, and remained pretty steady throughout the day, with a couple hundred folks having visited with us by the time the temperature was just barely starting to come down. Friends of C-H Freddie and Heather featured a nice post on Freddie's Bull City Bungalow blog, including a Flickr link to their photos of the day.

The fun then moved to the after-party, where neighbors, visitors, and friends hung out, and the sun set on a very weary, beery, and well-contented Cleveland-Holloway. Thanks for hosting, Leslie and Maria - your house is amazing!

The full contents of the Home Tour Booklet , with images and descriptions of all 17 properties included in the tour, are available online. Thank you so much to everyone who took out an ad, participated in the tour, donated time and/or resources, and came out to see the houses and meet our neighbors. A big ol' thanks to Triangle Brewing Company for their generous donation for the after party!

Here are a few images from the after-party-to-beat-all-after parties (until next year!). 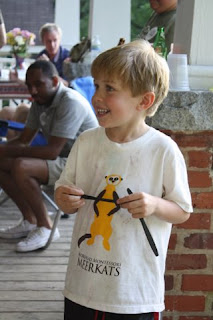 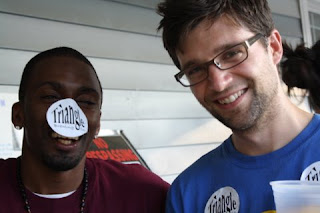 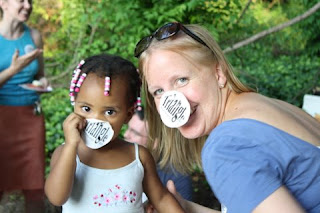 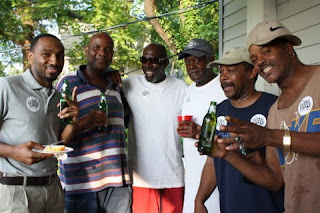 Email ThisBlogThis!Share to TwitterShare to FacebookShare to Pinterest
Labels: Activities, Homes for sale