Carlton is one of my favorite streets in Cleveland-Holloway. But it just got better: 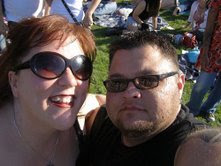 Please welcome Dante and Frances! They moved to Durham from Oakland. They are awesome. Dante is also a drummer and Fran is a writer and spoken-word artist.

***
Also, as many of you know, Ken Gasch bought a house on Carlton street - a cute folk Victorian number.

He has been diligently working in our neighborhood to help encourage positive investment of some of our historic homes. From Ken:

the house is at 604 carlton. erin is the director of alumni relations at Duke's Fuqua School of Business. kids are winston and tate. erin and i moved here in summer of 01 so she could attend biz school at duke. we lived in colorado for 4 years and were married there in j

une 2000. every day is a honey moon. we live in colonial village neighborhood (built during wwII, commissioned by corps of engineers, to house GI's returning from war). we bought a little 3 br bungalow. we fixed it up and still live there. erin asked me to sadie hawkins (sp? girls ask boys dance) in 9th grade. we share the same birthday and were always friends. we kept in touch after high shcool. she went to duke and got degree in history with emphasis on civil war. and in may of 96, she came to a party in Lubbock Tx where a class mate was graduating. we started dating. i graduated in dec of 06 with degree in mechanical engineering. i have attached a few photos.

Ken Gasch, REALTOR/Broker, has a strong track record of community involvement and neighborhood activism. He is the current President of Durham's InterNeighborhood Council, a founding board member of the Colonial Village Neighborhood Association and treasurer of Durham's Partners Against Crime - Police District 2. In his first year as a member of the Durham Regional Association of REALTORS®, Ken was awarded the Citizenship Award in appreciation and recognition of outstanding public service above and beyond the call of duty. Before embarking on a real estate career, Ken owned and operated HLD Productions, which created, designed, manufactured and marketed contemporary mechanical art to more than 100 American Craft galleries nationwide. Ken graduated Cum Laude from Texas Tech University with a BS in Mechanical Engineering. He lives in Durham with his beautiful wife, two wonderful children and one crazy dog.

About Ken Gasch and HLD

As a boy growing up in Dallas, I made machines that took lots of different forms. Most had wheels and were powered by pushing them over the crest of a hill. My little brother had the job of test pilot. By the time we reached high school, our mom’s ’79 puke green Mercury knew how to drive itself to the emergency room.

Due to my love of tinkering and building things, it was only natural that I would go to college to become a mechanical engineer. In 1996, after six years of diligent study, I graduated from Texas Tech. After a few years of designing machines for other people, I decided in 1999 I’d like to go back to making things that were all my own.

As you can tell from my illustrations, I have not had any formal art instruction. My work does not slice, dice or perform any other household chore. My two main objectives are to tickle your funny bone and to provide you with a sturdy heirloom that will last for generations.

My father, a retired U.S. Marine Corps gunnery sergeant, taught me the value of hard work and that any task could be accomplished with the right amount of gumption. My mother, a social butterfly, gave me her smile, brown eyes and gift of gab.

HLD Productions is named after my beautiful wife, Erin. I call her "Dar" which is short for "darling," hence HLD (Hot Li’l Dar).

All my work is entirely handmade in my North Carolina.


Posted by Cleveland Holloway Neighborhood at 11:48 AM