Growing up in Cleveland Holloway

As grown folks play horseshoes, the rhythmic clank of metal on metal heard streets away, the children of Cleveland Holloway add their chorus of glee.
Cleveland Holloway abounds with childhood. Mr. Troy returns home from the horseshoe pit when the kids get home from school. He takes up his quiet perch on his porch, keeping both eyes on the kids and sometimes enjoying a pipe.  Teresa and Chris spend evenings after work on their porch watching as their youngest son speeds up and down the street on his bike, racing with Tyree, the fastest biker in the neighborhood.  Ian and Madeline catch a glimpse of each other and run screaming each other’s name down the sidewalk, ending up in a puddle of hugs and eventual comparisons of the contents of their pockets (rocks, bugs, flowers).

On weekends, Tymel walks up the street and starts doing cartwheels across the lawn while reciting lines from Scarface, and his little sister Kristina comes running up behind asking if she can play too. They visit with kids and adults, looking for fun.
Some of the most kind and generous children live in this neighborhood. Games are expanded as more people show up, the youngest are fawned over, and the oldest help keep everyone in line.  Tiana’s balancing the line between childhood and grown, watching out for the littler kids, but giggling and cutting up with them as much as she can. She helps plant the garden, dutifully watering every flower and tomato and hoping that it will somehow grow this year.
Children in Cleveland Holloway live a magically charmed life. They can walk to the farmers market and have their pick of vacant lots, gardens, and parks in which to play.
I’ve bridged life stages of single young thing, part of hip couple, and now mommy in my decade in Cleveland Holloway. I’ve watched the little girls and boys grow into adults and parents in their own right. Roshaunda introduced me, coming over after school to make brownies with me (math) or tell stories (reading), or just have a quiet place to sit when life got too hectic. She’d flit between mine and Bill’s porch, Bill insisting that she walk to the library and check  out books, while I quizzed her on her multiplication tables or taught her fractions in the street. Lashena and Alex were the big girls back then, keeping their heads down, going to school, working part time, looking out for everyone and being taken care of in return.
Lashena and Alex are grown now and their respective son and daughter, Reginald and Sylvia, are the oldest of the current Cleveland Holloway babies. When Madeline was born, Sylvia toddled slowly down the street and up the walk to see the new baby that she’d get to play with one day.
So many children.  Every year kids move here, are born here, play here, and create friendships on these streets. Children have passed on here as well leaving sweet memories of their time with us and inspiring new traditions. 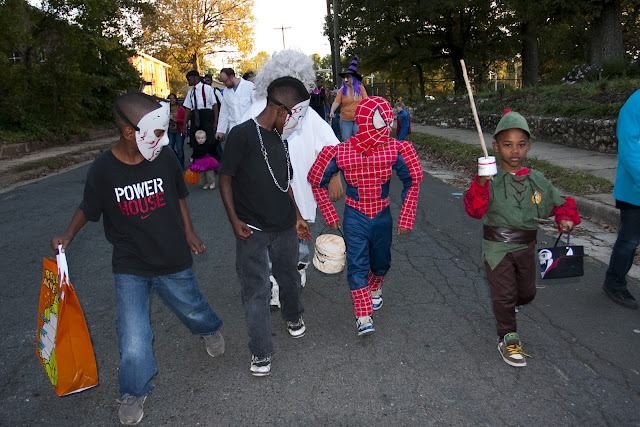 Little Jana will turn two years old soon. Neighbors organized a surprise baby shower for her parents, only to be surprised ourselves when she decided she needed to be born during the shower!  Her mother shared the vegan cake as her father loaded the car to go to the hospital. Dragana and Jana like to stroll around the neighborhood and people watch. “In the past few months while watching Jana all day I've been pretty grateful that we live within walking distance to so many new destinations (coffee shops, bakeries,central park, farmker's market).

While it does not make a huge difference to Jana where you walk, it has been more enjoyable to me to walk to a destination three times a day instead of just hanging out at a park. We also both have a great time people watching downtown. “
A big fan of Mr. Tom’s story time at the Main Durham Library, they hang out at the library a lot, taking part in the activities for the kids. Jana is also one of the kids at our great neighborhood daycare center, Kurmi Wasi  (http://kurmiwasi.weebly.com/). “It's awesome having a trusted neighbor watch your child when you can't.”
Ivy and Isabella are getting settled into the neighborhood.  Their mom and dad like to walk with them to the Durham Bulls and the YMCA. The girls love riding their bikes down the sidewalk to Oakwood Park where they play on the swings and see-saw or meet up with other little ones for adventure.  The walks around the neighborhood, out to downtown and American Tobacco help Ivy and ‘Bella make this neighborhood their home. 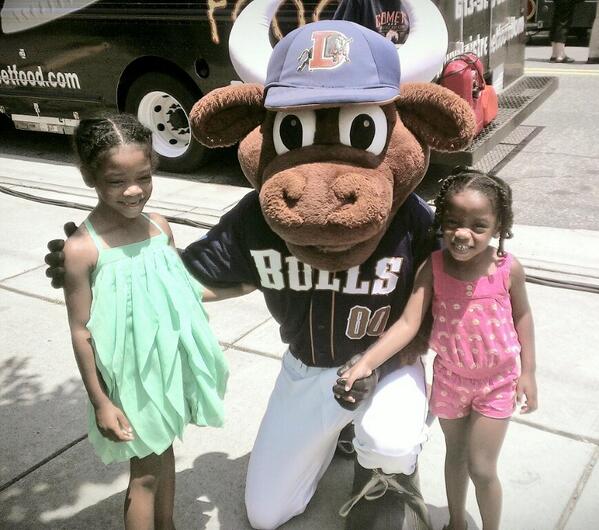 A couple of Saturdays ago, Madeline, Hayes, Ash, and Z walked to the Farmer’s Market. At the sandbox they ran into Ian, while their grown-ups ran into Elaine, Dylan, Taylor, and Cliff.  Community feels palpable here as the friendships formed on familiar streets are explored and deepened across a city.

Email ThisBlogThis!Share to TwitterShare to FacebookShare to Pinterest
Labels: Kids