Arthur and his family 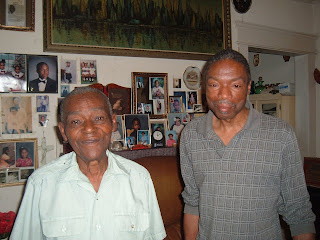 Arthur, Sr., with his son Lorenzo, in front of several family photos including Lorenzo's son, Damian, to the left of Arthur Sr.
Arthur and his sons Lorenzo and Gerald have lived in this house for over 27 years. Arthur's other son, Arthur Jr., has lived on the same street for just as long. 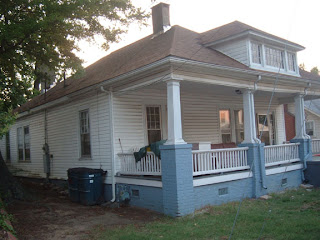 Arthur, Sr. can be seen working on his house every day, either on the roof or around the yard. When not working, he enjoys driving around the neighborhood to see what is going on, or watching pro-wrestling.

He just turned 80 years old in June 2007. He grew up on a cotton and tobacco farm which he visited frequently after moving to Durham in 1950. He recalls going to the Booker T. theater to see Westerns and other movies. Arthur spent most of his working years as a cement worker. Arthur reports that he learned a lot from his mother, who just passed away at 101 years old. She taught him to be accepting of others, even if he did not like them: "Feed them with a long-handled spoon," she used to tell him.

He likes the Cleveland-Holloway neighborhood because it is close to everything. But, he says, the first thing he would like to see is a grocery store in the neighborhood so "older folks can walk to it. People who can't walk well depend on a store nearby." He and Lorenzo would also like to have a nice park to sit in and see more people remodeling the old houses.

Lorenzo presents a portrait of his family around the time they all moved to Queen Street. Clockwise from the middle are Connie (Arthur's late wife of 50+ years,) Arthur, Jr., Lorenzo, 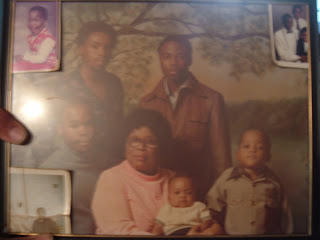 Gerald, and Arthur Jr.'s son, Michael. When asked why he (Arthur Sr.) was not in the picture, he replied, "I was probably working."
*~*~*

Sue and her Family
A view from our porch. Sue has lived in the neighborhood for over thirty years. She and her son live in the house on the left, 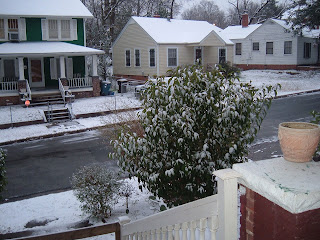 There are many close families in the neighborhood that extend back generations. Forty years ago, one of Sue's daughters, Maggie, went to school with Leon, the son of the family next door (beige house). Maggie and Leon ended up getting married, and have now been married for over 30 years.

Sue grew up on a tobacco farm in Granville county, but her family was forced to leave when the soldiers came through during the formation of Camp Butner. At eight or nine years old, she and her family moved to Durham, where she has been ever since. Sue is the youngest of eight children, one of whom owns the home on the far right in this picture (profile on those residents forthcoming).

Sue was married over 50 years to her (late) husband, Emeil, whom she met on the other end of Queen Street, the 200 block. Emeil was remembered fondly by neighbors who say he used to create steel decorations for them. Emeil worked for over 16 years at the Budd Piper Company as a draftsman. Sue worked for the Goldkist Poultry plant for 16 years. Before retiring, she worked for 10 years as a Nurse's Aide at the Durham Assisted Living (Rest Home). She still returns to visit the residents and staff.

Sue likes the convenience of this neighborhood, but would love to see a grocery store in walking distance. She enjoys old country music, and Hank Williams Senior is her favorite. 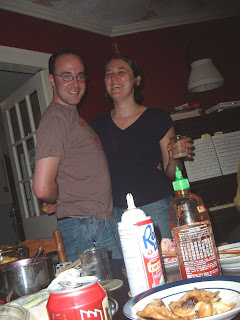 Natalie bought her house July 15, 2002. After moving up to NC from Atlanta she lived in Carrboro for a year. Then she learned about Durham Central Park. She drove around some of the neighborhoods and realized that she had to live here. It was tough finding an agent who would show her houses in East Durham and even tougher convincing the people afterwards that she knew what she was doing, wanted to be here, and really could take care of herself.

But she was in on a little secret. She thinks her neighbors and neighborhood rocks! "Every day I get to hear the delightfully cheerful whistling of my neighbor Mr. Arthur. I can sit on porches talking to people for as long as any of us fell sociable. I have a lovely little home with most of the original architectural details intact. I can putter in my garden, planting haphazardly, and painting anti-war signs. I am within walking distance of Ringside, Blue Coffee Cafe, Rue Cler, Piedmont, the Durham Bulls, Central Park, The Scrap Exchange, Bull McCabes, Brightleaf, and a bike ride away from 9th st."

"Now I get to share all of this and the little house at the bottom of the hill with my partner Harris. We enjoy our porch, our grill, and having our neighbors and friends over for dinner every Monday night."

"I want a fresh market a little closer to the house so that I can get fresh local foods more often than Saturday. I'd also love to see mixed use development that fits in with the scale and historic qualities of the neighborhood that serves the needs of our current residents."

For more on Natalie and Harris, check out their blog.

When we moved to Queen Street, it was her sign (pictured here) that caught my attention and Natalie who told us about the houses available in the area. 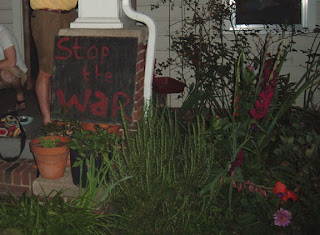 *~*~*
Willie Williams
Profile by Natalie (see above). Bill, as he's known around here, lived at 504 N. Queen St with his sister Elouis for 15 years. One summer, Bill 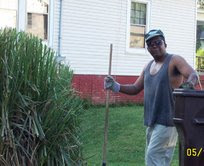 and Natalie jokingly instigated the Queen Street Porch Sitting Society because most days after he was finished cutting grass or assisting shut-in you could find Bill sitting on the porch asking neighborhood kids what books they were reading, drilling them on multiplication tables, or offering a walker a little bit of shade and company.
Bill grew up in Nash 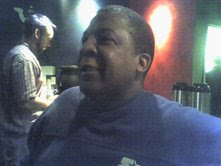 County North Carolina and traveled the world as a Navy Corpsman for over a decade. He lived in Washington, DC after he left the Navy but decided he needed a change and moved to Durham to be closer to his older sister.

politics, his president, and basketball with. He knows everybody in the neighborhood and genuinely cares about how everyone is doing.

In 2005, tired of dealing with an unresponsive landlord, Ms. Elouis moved to another house about two miles away. Bill now splits his time between the IFC in Chapel Hill and his sister's new house but is a frequent and much loved guest on all the porches in the neighborhood.
*~*~*
Zach, Alex, Sylvia, and Athena
More to come soon 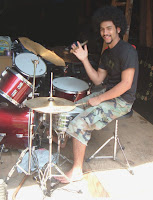 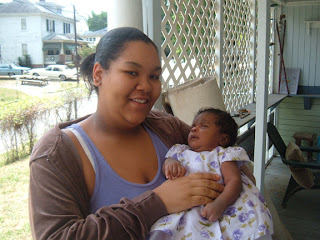 For now, here is Zach on the drums. He lives here with his Sister and her new baby, Sylvia.

As an artist, Zach is often seen painting or sketching various elaborate scenes. 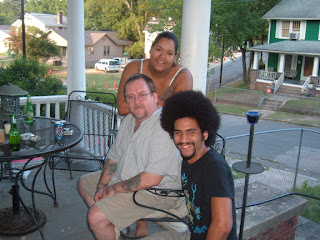 Their dog, Athena, is best friends with Syba (pictured below). They play chase and tug-of-war in Athena's yard almost daily.

Also pictured here is Alex and her daughter, Sylvia, and Alex and Zach with their dad out on their front porch. 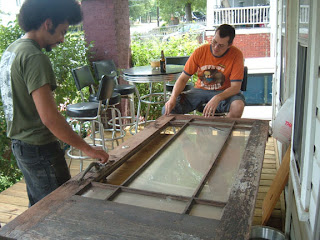 Zach is a great neighbor, always offering to help out. Here he's working with Rob (profiled below) to restore Rob and Eleni's old front door. 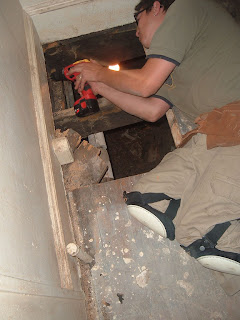 Rob and Eleni (mostly Rob) have been working on restoring their old 1928 Craftsman home. A duplex when they bought it in 2005, they have converted it back to a single-family home and continue to make repairs and improvements. Rob just installed a new porch that will better hold their guests for Monday night potlucks.

Pictured below, Rob and his bike (drum in tow) on the way to marching band practice (one of the things neighbors love best about this neighborhood is its close proximity to everything -- biking or walking). Rob plays the snare in the 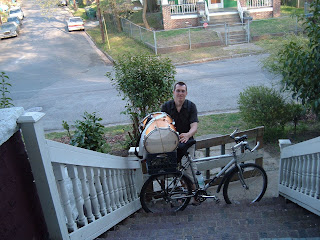 "Scene of the Crime Rovers," a radical marching Durham band experience. They practice at the Scrap Exchange and by the Farmer's market. Check them out here: http://www.myspace.com/sceneofthecrimerovers. 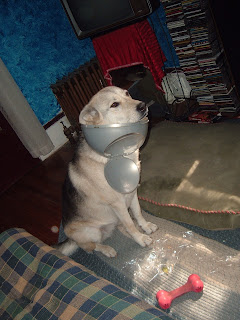 Eleni is currently busy at work making a documentary about the role of animals in society, called "Seeing Through the Fence." She is active in this organization and a drummer for a local band. She also cooks more than she updates her blog, Binge Cafe.

Syba "caught in the act" of locating good garbage (probably scraps left over from the potluck).

Greco, with one eye open to ensure attack capability. 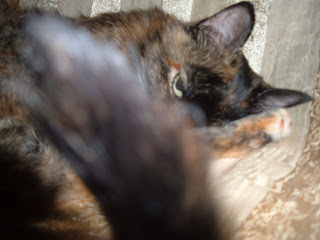 *~*~*
More neighborhood profiles are on the way!

Send us your suggestions at: clevelandholloway@gmail.com.